Sanhedrin 88: Let's Have a Debate 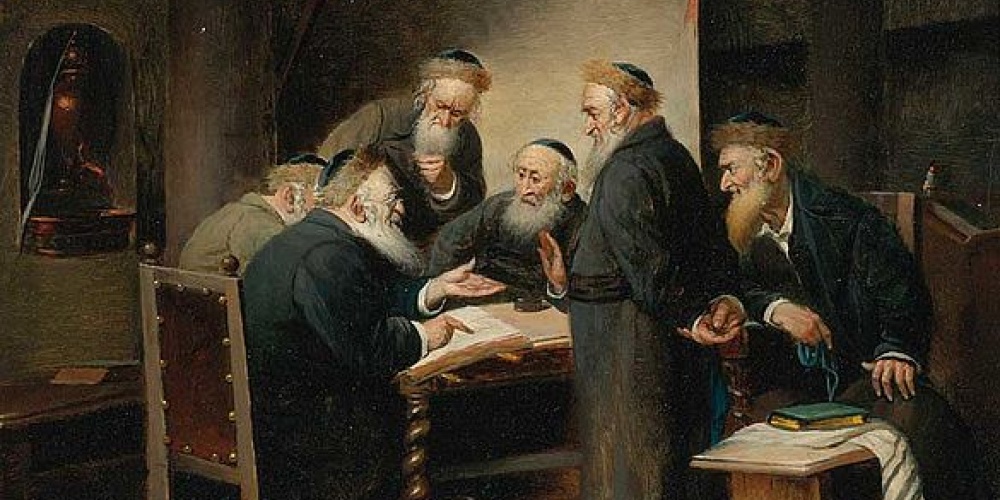 “Every argument that is for [the sake of] heaven's name is destined to endure. And if it is not for [the sake of] heaven's name, it is not destined to endure” (Avot 5:19). In a tradition as rich, varied and nuanced as ours, disputes over the interpretation of Torah are not only inevitable, they are desirable. Debate is a crucial component of Torah, allowing us to sharpen our reasoning and reach new understandings of Torah—provided the debate is truly for the sake of heaven, and absent ulterior motives.

“What is an argument] for the sake of heaven? The arguments of Hillel and Shammai”. As Rav Ovadiah MiBartenura (the most important commentator on the Mishna) notes, the Mishna specifically mentions the debates of Hillel and Shammai. However, those of their students and successors, Beit Hillel and Beit Shammai, are not to be classified as “for the sake of heaven”. Had someone of lesser stature said this on his own, we might have excommunicated him for such a disrespectful, not to mention ludicrous, claim.

Yet such seems to be the view of at least some of our Talmudic Sages as they describe the system for resolving questions of Jewish law that arose. “Rav Yossi said: Initially there were few disputes in Israel…when the number of students of Hillel and Shammai increased—who did not serve them properly—argument in Israel increased, and the Torah appeared as two Torot” (Sanhedrin 88b).

This passage gives beautiful expression to the multiple interpretations inherent in the Torah. The Torah is a sea of grey, and more often than not, there are two, or more, valid ways to apply Torah. There are good reasons why we might light eight Chanukah candles as opposed to one on the first night, or why we might say the blessing of mekadesh hashabbat before boreh pri hagafen when making Kiddush, to mention just two of the views of Beit Shammai.

More fundamentally, we can legitimately argue as to the rules of interpretation of the Torah. Should we assume every letter has crucial significance (Rabbi Akiva) or does “the Torah speaks in the language of man” (Rabbi Yishmael - see Brachot 31b) and hence  an extra word may be of no practical significance. Or to discuss a more modern question, there are reasons to argue that a Jew can use bankruptcy law to free himself of debts, and reasons to argue one should not do so, despite its legality.

To think that the notion that inherent in the Torah is a multiplicity of views is one not shared by all our Sages may sound surprising to some. Yet, one might even argue that it is the Gemara in Sanhedrin, which views these disputes negatively, that is the primary text.

Such seems to be the simple reading of view of the Mishna quoted above, and it is possibly the only conclusion one can reach in light of another well-known Talmudic passage, that of tanur shel Achnai (see here). In that passage (Bava Metzia 59b), Rabbi Eliezer brings proof after proof that his view is correct, culminating with a heavenly voice declaring the correctness of his position (see here). Yet Jewish law has rejected his view and accepted that of Rabbi Yehoshua, that “we do not listen to heavenly voices”. And as the Gemara notes (Yevamot 14a), Rabbi Yehoshua argued that Beit Shammai continued to follow their own practices, even after the heavenly voice declared the view of Beit Hillel as normative. Voices from heaven are not to be paid any attention, a position he bolstered by citing the Biblical phrase, “Torah is not in heaven” (Devarim 30:12). And it is the heavenly voice—one we are to ignore—teaching that the words of Beit Shammai are also the words of the living G-d.

Furthermore, in an amazing passage, the Talmud seems to let us choose whom to follow. “Leolam, forever and always, the law is like Beit Hillel, and one who wants to do like Beit Shammai may do so, and one who wants to do like Beit Hillel may do so” (Chulin 43b). After stating that the law is leolam, always and forever, like Beit Hillel, the Gemara calmly states that one may follow Beit Shammai and offers no criticism of those who do. All the Gemara says is that one who follows the stringencies of both is like “a fool wandering at night”, and one who follows the leniencies of both is (religiously) “evil”. But if one is consistent, one can follow whomever one pleases.

Jewish tradition has long encouraged debate, and points to Beit Hillel and Beit Shammai as models of disagreement. The Mishna (Yevamot 13b) praises the members of these two schools of thought for not hesitating to marry each other, even as they disputed the parameters of forbidden marriages (pointing out specifc cases that each would consider forbidden). Perhaps it is our passage in Sanhedrin that is rejected.

Or perhaps it depends on what type of debate we are talking about. Rashi (Ketubot 57a, s.v. ha) notes that when we are dealing with factual matters—the example he gives is an argument over what someone said—one cannot say eilu v’eilu, that both views are the words of the living G-d. Either one said A or he did not say it, and one of them is, in the words of Rashi, “lying”[2]. If the students of Hillel and Shammai did not “serve” their teachers well enough and hence, are unsure about what they taught, their debate cannot reflect the word of the living G-d. But when the debate is one of legitimate interpretation, this reflects the breadth and depth of Torah study; let the debates continue.

Furthermore, a closer look at the Talmudic passage in Sanhedrin reveals that it is not debate itself that is frowned upon, but rather having many unresolved debates. The Gemara begins by noting how initially, there were not many debates. But there were some, and those were easily resolved through the rabbinic court system. It is only when debates multiplied and multiplied that it reached the point when not all could be resolved efficiently. With disagreements galore and each school following its own path, the Torah was becoming like two. And when that happened, instead of examining each debate on a case-by-case basis, it was declared that the halacha follows Beit Hillel, allowing one clear resolution[3].

There are clearly voices in our tradition that want to limit—or at least resolve—all disputes, so that the Torah does not become like two; and other voices that allow, even encourage, a multiplicity of views and even practices, granting personal (or at least communal) freedom to choose whom to follow.

Yet we must not lose sight of the fact that these differing views may reflect arguments for the sake of heaven…or they may be the result of mistakes, negligence or uncertainty, or (as is perhaps most likely) some combination of the above.

[1] I recall Rav Schachter once mentioning – and I cannot recall in whose name he was speaking – that we longer have any disputes for the sake of heaven.

[2] The Tosafists are somewhat more forgiving, saying the erring party is merely “mistaken”.

[3] It may be absent a heavenly voice, but the Talmud itself has many of these types of rules. Thus, for example, we (almost always) follow Rava over Abaye, but not because the rabbis examined each of their hundreds of arguments and found Rava’s more compelling. Rather, it brought the debate to a timely resolution, allowing us to move on and a uniform practice to develop.

Art: Carl Schleicher, "A Discussion of the Talmud"
Thoughts from the Daf
Sanhedrin