Bava Metzia 59: Torah Is Not in Heaven 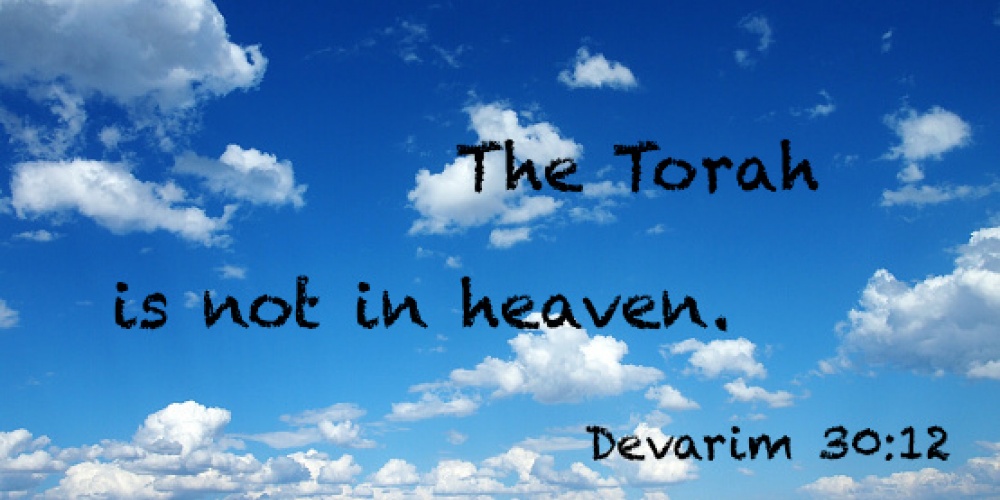 One of the most famous, powerful and tragic stories in all of Talmudic literature is that of the excommunication of Rabbi Eliezer ben Hyrcanus, known as Rabbi Eliezer Hagadol. The story outline is well known, though many of the details are not.

Rabbi Eliezer and the Sages had a debate regarding tanur shel achnai (more about that later- and PG in our next post). In order to demonstrate the correctness of his opinion, Rabbi Eliezer brought evidence from the carob tree, which moved some 100 and some say 400 cubits (a cubit is approximately 18 inches); the stream of water, which started to flow backwards; the walls of the Beit Midrash, which began to cave in; and finally from G-d Himself whose heavenly voice declared, “Who are you next to Rabbi Eliezer, as the law is in accord with him all the time” (Bava Metzia 59b). The Rabbis were not impressed as they told him “we do not bring proofs from carob trees”, “we do not bring proofs from streams of water”, and that “Torah is not in heaven (Devarim 30:12)…and we don’t pay attention to heavenly voices.[1]” The Gemara continues that Rabbi Natan met Eliyahu [Hanavi] and asked him what G-d was doing while this debate was going on. Eliyahu answered that G-d “was smiling and said ‘nizchuni banai, nizchuni banai, my children have defeated me, my children have defeated me.”

This story is beyond astounding. The Rabbis, in dramatic fashion and super hyperbole, make very clear that it is the Rabbis and not G-d who determine Jewish Law. To phrase it somewhat differently, it is the Rabbis who are authorized to interpret G-d’s Torah, even over the objections of the Divine author Himself[2]. It matters little what G-d had in mind. It sounds heretical, but such is the nature of Torah and the will of G-d.

Halacha is not the expression of absolute truth, but of truth as best determined by human minds seeking to uncover the truths of Torah. “Eilu v’eilu divrei Elokim chaim, these and those are the word of the living G-d” (Eiruvin 13b), even as “these” and “those” disagree as to the best way to understand the word of the living G-d. Much like a (mature) parent raises a child to be independent and is proud even, perhaps especially, when the child makes choices that may differ from what the parents had in mind, so too G-d, “our father in heaven,” is most proud when His children assert their independence in their understanding of Torah even if He would have chosen otherwise. So much so that He not only instructs us to follow our path, but smiles as He does so.

Here too those in heaven accepted with joy that which earthly beings argued. “Immediately they gave praise to the Holy One, blessed be He, for it is said, O Lord, our Lord, how excellent is Your name.”

Nitzchuni banai means more than we have defeated G-d. The root of nitzchuni is netzach, permanence, as expressed in the verse netzach yisrael lo yishaker (Shmuel 1, 15:29), the eternity of the Jewish people will not be broken. Nitzchuni banai, my children, G-d declares, have made me eternal. It is the Sages of each generation who, through their interpretation of Torah, guarantee its eternity. A static Torah cannot endure – and many who have left observance did so because they felt the Torah was no longer relevant.

This idea is reflected in another well-known Midrash relating to the giving of the Torah. Moshe Rabbeinu, the Gemara (Menachot 29b) tells us, is transported to the Beit Midrash of Rabbi Akiva and is disheartened that he cannot follow the discussion. Only when Rabbi Akiva explained the source of a law as being halacha leMoshe miSinai was Moshe pacified. Note the Gemara does not say that Moshe now understood the conversation. He did not, but that mattered little; what mattered was that this law originated with him at Sinai. Just as scientific principles are developed and applied in all kinds of ways far beyond what the one who discovered such could ever imagine, so Torah ideas are developed and applied to an ever-changing world. Halacha as the intersection of an unchanging Torah and constantly changing reality can look very different in different time periods or places. Only by “changing” the halacha given at Sinai can we assure the continued relevance of Sinai.

“And this is the oven of achnai.” The story began with an argument over the purity of an oven. An oven takes inedible raw materials and makes them fit for consumption. G-d has provided the raw materials but it is up to man to properly season them and make sure they cook for just the right amount of time. Torah is no longer in heaven.

[2] The notion that an author may not be the best one to interpret his own work is well accepted in literary theory. One can write in such a way as to allow multiple interpretations including those you never thought of. In a similar vein, when Rabbi Soloveitchik was asked if he really believes that his interpretations of the Rambam are what the Rambam had in mind, his succinct and powerful answer was that it does not matter. The fact that the Rambam could be interpreted this way is good enough. One may agree or disagree with such an approach but surely such is only relevant for a human author. When dealing with the Divine author surely His view must be the accepted one. Or so one would think.