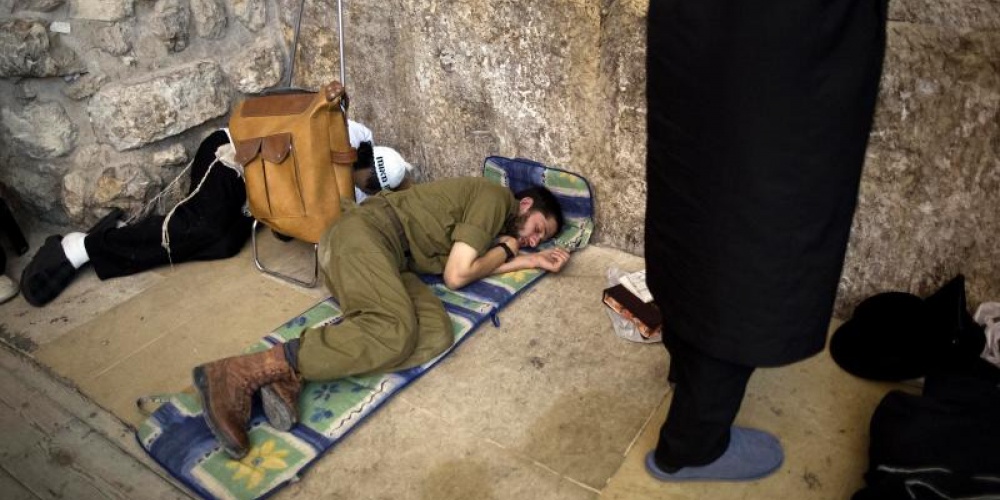 The kohen gadol had a hard day of work on Yom Kippur. The avodah, the special Yom Kippur Temple service, was intricate and difficult, and had to be performed after the kohen gadol was forced to stay up all night. He was kept up to avoid the possibility of a seminal emission, which would disqualify him from working on Yom Kippur. The Gemara relates how the mikarei Yerushalayim, the important people of Jerusalem, would also stay up making noise through the night, to make it difficult for the high priest to doze off (Yoma 19b).

The idea of staying up through the night on Yom Kippur had special significance beyond the Temple as well. "Abba Shaul taught, even in the countryside they would do so, zecher lemikdash", to commemorate what happened in the Temple. The Shulchan Aruch (Orach Chaim 619:6) quotes a custom to stay up (most or all of) the night of Yom Kippur singing praises to G-d[1]--a custom that was observed by Rav Soloveitchik[2].   However--like many a custom of great piety--it is not for everybody, to say the least. Abba Shaul concludes by teaching, "but they used to sin".

And what might that sin have been? "Eliyahu said to Rav Yehuda, the brother[3] of Rav Selah Chasidah, 'You wonder why the Mashaich has not come, as it is Yom Kippur today?'" Eliyahu, the prophet of redemption, represents the aspirations of the Jewish people. He thus "appears" at every brit, welcoming the newborn into his personal covenant with G-d; and at the Pesach seder, as we look forward to the national redemption of the Jewish people. In theory, Eliyahu should appear on Yom Kippur to herald the coming of the Mashiach. On the Day of Atonement, our sins are forgiven, and thus, the Mashiach should not tarry.

Eliyahu[4] explains why such is not the case: "How many virgins were embraced in Neharda?" Eliyahu uses a most extreme example to highlight the ongoing sins of the Jewish people. Sin often hides underneath the cloak of piety. It is the rare person who can stay up at night devoting his time to Torah study and repentance. For the rest, it is better go to sleep than risk sinning.

Rav Yehuda then asks Eliyahu what G-d says about those who stay up the night of Yom Kippur, yet engage in sin. In a message that should give us all hope, Eliyahu answers, quoting the verse, "Sin croucheth at the door; and unto thee is its desire, but thou may rule over it" (Breisheet 4:7). G-d understands that we sin--it was He who implanted in us that evil inclination that compels us to sin. While we may not be worthy of Mashiach, we can achieve atonement.

Finally, Rav Yehuda asks what Satan, the embodiment of the evil inclination, has to say about this. Eliyahu answers that the Satan is powerless on Yom Kippur. The numerical value of the word HaSatan is 364, representing the days Satan, our evil inclination, reigns supreme. However, on day 365--i.e., Yom Kippur--he has no permission to act.

Our evil inclination is powerful and unrelenting. Yet at least one day a year it is relatively easy to combat. Absorbed in prayer and repentance, as we ignore our physical needs and focus on our spiritual development, the evil inclination has little sway over us. But that is not enough to bring Mashiach. In order to do that, we must do a better job the other 364 days a year. We need not do the extraordinary; we simply must become much better at doing the ordinary well.

[1] Interestingly, the Shulchan Aruch (608:4) records a custom not to eat foods that warm the body, and thus, might lead to a seminal emission.

[2] Many have the custom to stay in shul singing the special Shir Hakavod, including Anim Zemirot. Rav Soloveitchik felt that only on Yom Kippur, when we are like angels, are we allowed the "audacity" to so praise   G-d. For this reason, he opposed the singing of Anim Zemirot on Shabbat (see Nefesh HaRav, 162).

[3] While Talmudic rabbis are generally identified by their father's names, Rabbi Yehuda is identified referencing his brother-and for good reason. He was Sela Chasida, a name that literally means "the pious rock". Piety requires one to be hard and dependable as rock, resisting temptation. We pray to the Tzur Yisrael, the rock of Israel, to redeem us.

[4] It is most interesting that he is referred to as Eliyahu without the appellation Hanavi, as he is usually identified. Perhaps his message that teshuva must continue beyond Yom Kippur is so obvious that no prophet is needed to teach such.