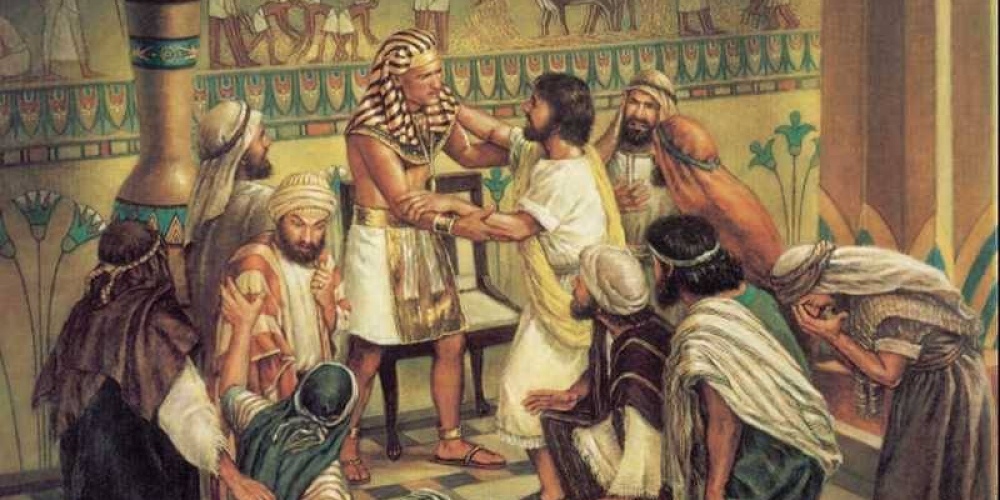 It is assumed by many that Yehuda made this quote up to help gain the mercy of the Egyptian Viceroy who held the power of life and death over the younger of the two sons. His brother, Yehuda noted, had already died; and "now you want to take this one from me too?" (44:29). This will kill our father, causing him to go "down to the grave in misery". This was a passionate--but not fully truthful-plea from the one who had taken responsibility for his brother, and now faced the real possibility of standing before his father, having failed in his mission.

We find no mention of this actual conversation between Yaakov and his children as he sought to avoid sending Binyamin to Egypt. But, in and of itself, the Torah's silence is no proof that such a conversation did not take place. It could have taken place but not been recorded at the time. This would be similar to the Torah not telling us about Joseph's cries for mercy and the brothers' deafness to his pleas as they threw him in the pit at that time. The Torah waited 22 years, until Shimon was taken as a hostage, to record such.

The "proof" that such a conversation did not take place is its starkness. Is it possible that Yaakov would tell ten of his children that his wife bore him only two children? Had nothing been learned from the favoritism shown to Joseph? Did Yaakov want to cause the brothers to also hate Binyamin? Did Yaakov not consider his other children--and their mothers--his own? Surely, Yehuda must have made this up. Or did he? Is Sefer Breisheet not characterized by overt displays of favoritism? Was that not the method by which parents chose their preferred successors? And even if Yaakov did not actually say such, can one fault the brothers for feeling such? Why did Yaakov harbor no fear of sending ten of his children to get food in Egypt--but refused to send Binyamin lest "something may happen to him on the way" (42:38)? Would it be acceptable if something were to happen to them? Much is communicated beyond the actual words we use.

"Joseph could not restrain himself...and no one was with him when he revealed himself to his brothers" (45:1). Yehuda's pleas worked, and Yosef was overcome with emotion as he prepared to reveal himself to his brothers. But before he actually did so, "he raised his voice in tears, and Egypt heard and the house of Pharaoh heard" (45:2). This must have been some cry[1].

Joseph realized that there could be no complete reconciliation. The problem that caused tension between him and his brothers was repeating itself--albeit with less ferocity--with Binyamin. Even Joseph himself was guilty of such, giving Binyamin five times as many clothes as he gave to the other brothers plus 300 pieces of silver. Perhaps it could be no other way, but the nascent nation was still a divided people. Yes, they could hug and [pretend to] make up, but years of bitterness of separation and division are not wiped away in a moment. The family may have been together, but they were far from united. The brothers spent many, many years together in Egypt but, save for burying their father, had nothing to do with each other. Only in such an environment could the brothers fear that, upon the death of Yaakov, Joseph would seek revenge (50:15), forcing Joseph to cry again.

Sadly, there is still reason to cry. As we read the saga of Joseph year in and year out, we are reading about current events. We may join together in times of crises, but the divisions are too many and too bitter.

We look forward to fulfillment of the vision of Yechezkel--the Haftarah aptly chosen by our Sages for Parshat Vayigash--when we "take a stick and write upon it for Yehuda and the children of Israel his companions, and take a stick and write on it for Joseph the stick of Ephraim and all the house of Israel and his companions; and bring them close to one another so that they shall be one stick, so that they are one in your hand" (Yechezkel 37:16). May each of us do our part in making this prophecy come true.Shabbat Shalom!

[1] One might be tempted to say that we need not read the text so literally--and what the people heard was the story of the tearful reunion, not the cries themselves. However, these cries took place before Joseph revealed himself, so there was nothing to hear except the cries of Joseph. That the story was heard by all is the meaning of verse 16, "the news spread to Pharaoh's house that the brothers of Yosef had come".