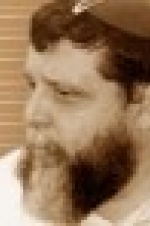 Rabbi Refael (Rafi) Feuerstein was born in Jerusalem in 1959 to his father Prof. Reuven Feuerstein, founder of the well-known Feuerstein methodology for the advancement of thinking and learning skills, and to his mother the late Berta Guggenheim Feuerstein, artist and doer of good deeds. He is married to Tal, a cognitive therapist who works with brain-damaged individuals at the Feuerstein Institute. They have eight children and one grand-daughter. Rabbi Feuerstein's schooling was at the Netiv Meir Yeshiva High School in Jerusalem and he then went on to study for eight years at Jerusalem's Merkav Harav Yeshiva (1977-1985). The next two years were spent at the Pesagot Yeshiva for married students where he studied to be a Dayan (religious judge). He served in the IDF while continuing to pursue Yeshiva studies. Rabbi Feuerstein received his rabbinical ordination from Rabbi Abraham Shapira, of blessed memory, head of the Merkaz Harav Yeshiva and former Chief Rabbi of Israel. In 1988, Rabbi Feuerstein was appointed Ram (senior teacher) of Gemara and Jewish Philosophy in the (Hesder) Yeshiva on the religious kibbutz of Ein Zurim near Ashkelon. In 1989, following the birth of his second son, Elhanan with Down Syndrome, Rabbi Feuerstein began studying Psychology and Philosophy at the Hebrew University of Jerusalem and he is currently preparing a Ph.D. degree in Psychology at Bar-Ilan University. In 1993 he joined the Feuerstein Institute where he specialized mainly in cognitive-dynamic assessment. Over a period of several years he has developed, together with his father, additional methods of intervention and assessment and he has co-authored numerous books and articles in the areas of cognitive intervention, furtherance of people with special needs using the Feuerstein methodology, and dynamic assessment. He has also developed intervention methods for the prevention of human error amongst pilots, doctors and senior administrators. Over the last ten years Rabbi Feuerstein has focused particularly on introducing methods for advancing learning skills into the educational systems in Israel and other countries throughout the world, and on advancing culturally-different people (particularly Ethiopian immigrants to Israel, people in South Africa and Afro-Americans in USA). Today Rabbi Feuerstein is the vice-chairman of the Feuerstein Institute which has 70 branches in some 40 countries. He is particularly involved in the evolvement and forward progress of these branches. In 1996, Rabbi Feuerstein founded the Tzohar Organization of Rabbis together with colleagues, Rabbi David Stav and Rabbi Tzahi Lehman. The organization was established followed the assassination of the late Prime Minister Yitzhak Rabin with the purpose of creating a common Jewish identity for Israeli society at large. Rabbi Feuerstein and his colleagues established a widespread organization of volunteers consisting of religious-Zionist rabbis who began by marrying secular couples on a voluntary basis with the aim of changing the ceremony which was perceived as problematic by the secular couples. The organization rapidly became a sort of alternative chief rabbinate in a variety of areas. In this way, Tzohar changed the attitudes of a great many secular people to their Jewish identity and offered a wide range of religious services – whilst simultaneously adhering to Jewish religious law and showing understanding and consideration – to a broad section of the population. Today the organization has hundreds of key rabbis in its ranks and is considered one of the most influential organizations of its type. For five years Rabbi Feuerstein was the first chairman of the organization and today he is a member of the central executive board. Rabbi Feuerstein lectures very frequently in Israel and all over the world on education and therapy as well as on Judaism. In 2000 Rabbi Feuerstein was appointed community rabbi of the National-Religious community of Har Nof in Jerusalem and for the last ten years has remained in this capacity. Rabbi Feuerstein frequently writes and grants interviews for Israeli and foreign media on the various topics he is involved in – for the last four years he has had a permanent column in the popular portal YNET. He is heavily involved in public affairs related to his three major fields of occupation – advancing the skills of people with special needs, promoting educational policies according to the Feuerstein theories and advancing a shared Jewish identity in the State of Israel and throughout the Jewish world.