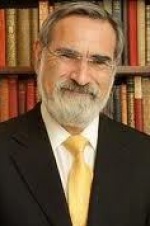 Jonathan Sacks was Chief Rabbi of the United Hebrew Congregations of the Commonwealth from 1991 to 2013, the sixth incumbent since the role was formalised in 1845.

Prior to that post, Rabbi Sacks was Principal of Jews' College, as well as rabbi of the Golders Green and Marble Arch synagogues.

Educated at Gonville and Caius College, Cambridge, where he obtained first class honours in Philosophy, Jonathan Sacks pursued postgraduate studies at New College, Oxford, and King's College London, gaining his PH. D in 1981 and rabbinic ordination from Jews' College and Yeshiva Etz Chaim. Rabbi Sacks has been a visiting professor at several universities in Britain, the United States and Israel, and is currently Visiting Professor of Theology at Kings' College London. He holds many honorary degrees, including a Doctor of Divinity conferred to mark his first ten years in office, by the Archbishop of Canterbury.

At the time of his installation, Rabbi Sacks launched a 'Decade of Jewish Renewal'.  This led to a series of innovative communal projects including Jewish Continuity, a national foundation for Jewish educational programmes and outreach; the Association of Jewish Business Ethics; the Chief Rabbinate Awards for Excellence; the Chief Rabbinate Bursaries, and Community Development, a national scheme to enhance Jewish community life.  The Chief Rabbi began his second decade of office with a call to 'Jewish Responsibility' and a renewed commitment to the ethical dimension of Judaism.

Rabbi Sacks received the Jerusalem Prize 1995 for his contribution to diaspora Jewish life, and was knighted by Her Majesty The Queen in 2005.  He was made a Life Peer and took his seat in the House of Lords on 27 th October 2009, where he sits on the cross benches as Baron Sacks of Aldgate in the City of London.

Rabbi Sacks is a frequent contributor to radio, television and the national press.  He regularly delivers BBC RADIO 4's Thought for the Day, writes a monthly CREDO column for THE TIMES and broadcasts an annual Rosh Hashanah message on BBC 2.  In 1990 he was invited by the BBC Board of Governors to deliver the annual Reith Lectures which were then published as The Persistence of Faith .  The Dignity of Difference was awarded the 2004 Grawemeyer Prize for Religion, and  A Letter in the Scroll a National Jewish Book Award 2000.

Born in 1948 in London, he has been married to Elaine since 1970.  They have three children, Joshua, Dina and Gila and four grandchildren.

Many of his books have been translated into French, Italian, Dutch, German, Portuguese, Korean and Hebrew.