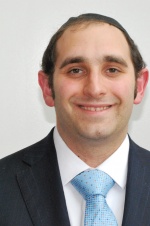 Rabbi Jonathan Ziring is currently a Ram and the Education Coordinator at Yeshivat Migdal HaTorah in Modiin. Prior to that, he was the Sgan Rosh Beit Midrash of the YU-Torah Mitzion Zichron Dov Beit Midrash of Toronto, having served previously as a member of the Kollel Gavoah in Yeshivat Har Etzion (Gush) where he studied and taught. He has smicha from RIETS, an MA in Jewish Philosophy from Bernard Revel Graduate School, and a BA in Philosophy and Jewish Studies from Yeshiva College.

He has been a fellow at the Tikvah Fund, the Centre for Jewish Law at Cordozo, and the Centre for Modern Torah Leadership’s Summer Beit Midrash and has taught classes in many venues, including the NYU and Columbia Hillels, as well as many schools and Synagogues.  He has most recently finished writing a series for the Virtual Beit Midrash on Halakha in the Age of Social Media.