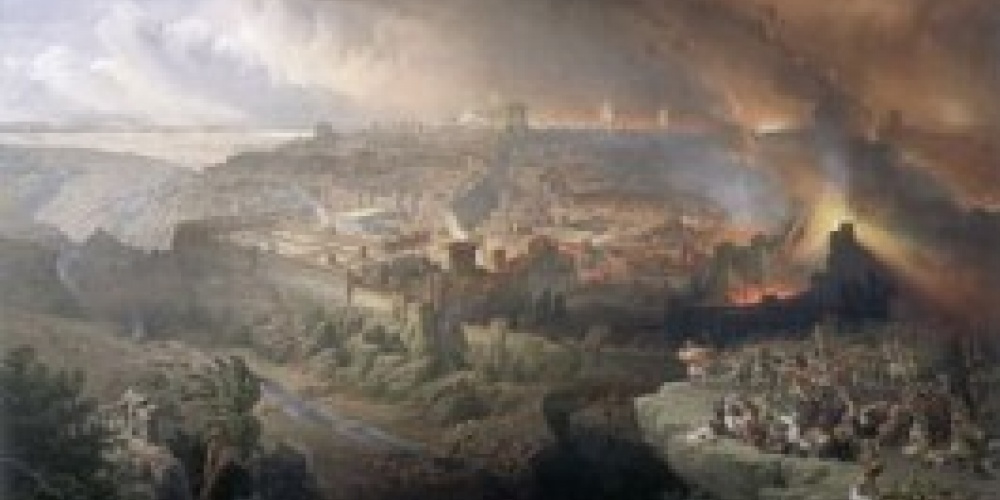 Although it is mashechet Gittin (55b-57b) that records the stories relating to the destruction of the Temple[1], the famous Talmudic passage stating that the first Temple was destroyed because of the three cardinal sins of idolatry, adultery, and murder, and the second because of sinnat chinam is actually found in mashechet Yoma (9b).

The Talmud, as discussed in our previous post, explained how the kohanim gedolim of the second Temple period would not live out their year due to their corruption in attaining the position, one that they were unworthy to hold. The Talmud then moves to a discussion as to why the Mishkan at Shilo was destroyed, placing the blame on the sons of Eli, who served as the high priests[2]. From there, it is a simple transition to a discussion of the sins that caused the Temple to lose all meaning.

The Gemara, while comparing the sins of various generations, asserts that the sins of the later generations were worse than those of the earlier ones. "Birah tocheach", the fact that the first Temple was rebuilt seventy years after its destruction, while we still await the rebuilding of the Temple after its second destruction (and this statement was made approximately 1,750 years ago), proves that the sin of baseless hatred is even worse than adultery, idolatry, or murder combined. While it seems almost preposterous to claim that hating someone is worse than killing him, the Gemara is addressing the impact on society and its ability to rectify the wrong. During the period of the first Temple, hatreds were out in the open, allowing for possible reconciliation; and while murder did happen, it was limited in scope.

However, the people of the second Temple era were "sinners in secret" (Rashi)[3]. The hatred was more widespread and insidious, and next to impossible to eradicate. It is somewhat comparable to the ethical quandary of which is worse, one person who kills thirty, or thirty who kill one? While the former is worse on a practical level, the latter is much more dangerous from a societal point of view (see Sefer HaChinuch #238).

Rav Yochanan, the leading Talmudic Sage in the land of Israel in the second half of the third century, thus claims that "the fingernails of the earlier generations are better than the abdomen of the later generations". His colleague, Reish Lakish, while likely acknowledging that, objectively speaking, the later generations were worse, asserts that—in historical context—they are much better. "All the more so," he answered Rav Yochanan, "the later ones are better; even though they are subject to oppression, they are still engaged in Torah study". If after 2,000 years of pogroms, inquisitions, expulsions, and the Holocaust Jews still are connected to Torah, they are truly amazing.

Yet, at the same time that he was praising the people for their continued faith, he was not averse to being sharply critical of those, especially his rabbinic colleagues, who remained in Bavel. Reish Lakish was bathing in the Jordan River, and Rabba bar bar Channa, visiting from Israel (to study with Rav Yochanan), stretched his hand to greet him. The latter refused to shake his hand, stating that "G-d hates the Babylonians", interpreting a verse in Shir Hashirim as teaching that had the Jewish people returned en mass from Bavel when given the opportunity to do so, the Temple would still be standing. But since so few returned (only 42,000 and change), the Temple was compared not to silver, which does not rot, but to cedar, subject to decay.

Whether the sins of those who lived during the first Temple or the second Temple were worse no longer matters. What matters is what we are doing about ensuring our future so that we be worthy to rebuild the third Temple. Especially those living outside the land of Israel must work hard to act in a way that G-d will surely love us.

[1] In editing the Talmud, careful attention was paid to "matching" the aggadic (non-legal) and halachic (legal) sections. Thus, the stories detailing the special sanctity of the land of Israel are recorded in mashechet Ketuvot, which discusses the special bond between husband and wife; and those of destruction are detailed in Gittin, which discusses the tragic breaking of those bonds. Similarly, mashechet Makkot, which details the punishment of lashes given instead of karet, excision, concludes with the famous story of Rabbi Akiva laughing at the destruction of the Temple. He was able to foresee the good that can come from bad.

[2] The Talmud ascribes it to their laziness in delaying the sacrifices of the women brought after going through childbirth, who would be forced to return home a day later. The delay in allowing them to be intimate with their husbands was serious enough to help bring about the destruction of the Mishkan!

[3] Yosef's brothers, whom we will "meet" this Shabbat, are praised by the Sages for at least not hiding their hate: "they could not speak to him in peace" (Breisheet 37:4, and see Rashi). Our Sages understood that even those conducting evil can have positive aspects to their character.