Bava Metzia 84: I Can't Learn Without You 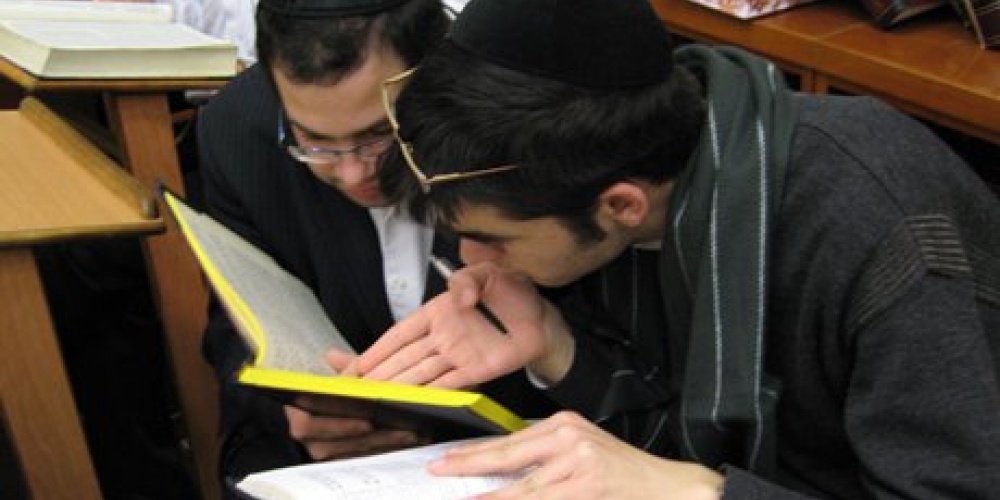 The traditional way to study Talmud is with a chavruta, a study partner, someone with whom to bounce off ideas, debate, question and argue about how to best understand the Talmudic sugya. Having someone to challenge our ideas and interpretations is indispensable in helping to clarify and refine our understanding of the text before us. “What is [the meaning of] what is written (Proverbs 27:17), 'Iron sharpens iron?' To say to you [that] just as [in the case of] iron, one sharpens its fellow; so, too, two Torah scholars sharpen each other in [matters of] halacha" (Taanit 7a).

The interaction of study partners is meant to be intense, boisterous, even argumentative. Using a play on the words oiyev, enemy and ohev, beloved, “Rav Chiyya bar Abba said: Even father and son, master and disciple, who study Torah at the same gate become enemies of each other; yet they do not depart from there until they come to love each other” (Kiddushin 30b).

It is for good reason that our Sages coined the term milchamta shel Torah[1], the war of Torah; when seeking truth, we must (metaphorically) battle with all our strength. But when the war is over, each having brought new insights and perspectives to their chavruta, a special, almost unbreakable bond is formed.

Those who study alone do so at their own peril. “Rabbah bar bar Channah said: Why are words of Torah compared to fire?…Just as fire does not kindle by itself; so, too, words of Torah do not survive by oneself” (Taanit 7a).

Perhaps there was no more powerful chavruta than that of Rav Yochanan and Reish Lakish. Theirs is a beautiful, powerful and ultimately tragic story of two great but very different Talmudic Sages who were so close that one literally could not live without the other.

The story begins with the beauty of Rav Yochanan[2]. “Rav Yochanan used to go and sit at the gates of the mikvah. He said: 'When the daughters of Israel ascend from the bath', it is a mitzva to look upon me, so that they may bear children as beautiful and as learned as I[3]'” (Bava Metzia 84a).

Not only women noticed the beauty of Rav Yochanan. The Talmud continues with the story that one day when Rav Yochanan was bathing in the river, Reish Lakish, a physically imposing figure who at the time served as a Roman gladiator, jumped into the water. “Rav Yochanan said to him, 'Your strength should be for the Torah.' 'Your beauty,' he replied, 'should be for women.' 'If you will repent,' said he, 'I will give you my sister [in marriage], who is more beautiful than I'” (Bava Metzia 84a).

Reish Lakish agrees to the offer – as did (apparently) Rav Yochanan’s sister, though we only hear from her later – and Rav Yochanan teaches Reish Lakish Torah, making him into “a great man.” Eventually the student becomes the chavruta of the teacher, not to mention his brother-in-law and closest friend. They learned together for years and hundreds of their disputes are recorded in the Talmud. Yet, as can happen in life, one tragic misstatement led to tragedy. And as so often happens, it is some obscure incident that triggers the tragedy.

A dispute arose regarding at what point a sword, knife, dagger, spear, hand-saw and scythe are considered completed and thus subject to the laws of purity. “Rav Yochanan said: 'When they are tempered in a furnace'; Reish Lakish said: 'When they have been furbished in water.'” Recognizing that Reish Lakish, as a former gladiator, had much more experience with swords, daggers and spears than he, Rav Yochanan seemed to willingly concede. “He [Rav Yochanan] said to him: ‘a thief knows the implements of thievery.'”

Presumably, Rav Yochanan meant it as an innocent, even laudatory, comment, acknowledging how Reish Lakish could apply the knowledge of his unsavory past towards understanding Torah. It could be seen as an example of “how sins can become merits.” Perhaps, but that is not how Reish Lakish understood it. To him, it was a painful reminder of his past sinful ways, a violation of ona’at devarim, causing unnecessary mental anguish to another.

Reish Lakish, deeply hurt, felt that becoming a ba’al teshuva had not been worth it. “What have you benefitted me?” he cried out. “There [as a robber] I was called Master, and here I am called Master.” I might as well have remained a gladiator – there, too, I was recognized as the best in my field, and no one would dare start up with me.

There is little one can or should say to such – it’s best to let tempers cool. Yet Rav Yochanan, perhaps feeling that such a claim could not go unchallenged, responded, “By bringing you under the wings of the Shechinah.” This was a dialogue of the deaf and we do not hear from Reish Lakish again. What we do hear is that “Rav Yochanan felt pained and Reish Lakish fell ill.”

Rav Yochanan’s sister, the wife of Reish Lakish, begged Rav Yochanan to pray for Reish Lakish lest she be widowed and his nieces and nephews be orphaned. Yet all Rav Yochanan would do is quote some verses how G-d guards the widows and orphans[4]. And so it was to be.

“Reish Lakish died, and Rav Yochanan grieved over him greatly”. Oh, how often we realize our mistakes too late. Hoping to console him, the Sages sent Rav Elazar ben Pedat to be Rav Yochanan’s chavruta. But – not unlike marriage, where two great people may not be compatible - it takes much more than two great scholars to make a suitable chavruta. “So he went and sat before him; and on every dictum uttered by Rav Yochanan he observed: 'there is a braita which supports you.'” This was an echo chamber, not a chavruta.

This sad story echoes that of the 40-year rupture between Rav Huna and Rav Chisda. There, an innocent meaning but insensitive question led to forty years – forty! – of anger (see here). It also mirrors the tragic story of tanur shel achnai. There, too, an obscure argument about the laws of purity and impurity led to a terrible fight that led to the excommunication of Rabbi Eliezer and the death of Rabban Gamliel (see here).

[1] All wars take a toll and the “war of Torah” is no exception. The beit midrash can at times yield harsh words, as we shall soon see, and rabbinic writing can be quite abrasive, even off-putting for those uninitiated to the culture of the beit midrash.

[2] Notions of beauty sure do change over time. Just a few lines earlier, the Gemara notes that Rav Yochanan was so, shall we say, rotund, that “Rav Papa said: 'Rav Yochanan's waist was as a bottle containing five kabs.'”

[3] This story is not one worthy of emulation, akin to Rav Kahana hiding under the bed of Rav so he could learn the proper way one is to be intimate with one’s wife (Brachot 62a).

[4] The simple reading of the Gemara is that Rav Yochanan was greatly pained by the unacceptable chutzpadik remark of Reish Lakish, and hence refused to daven for him, feeling Reish Lakish had brought punishment upon himself. Yet perhaps one could explain that Rav Yochanan’s pain was directed at himself for his insensitive remark, and he felt unworthy of prayer invoking verses that ask G-d to take mercy on His creations. The ambiguity of the Gemara allows and encourages us to view them both as correct and draw the appropriate lessons for ourselves.