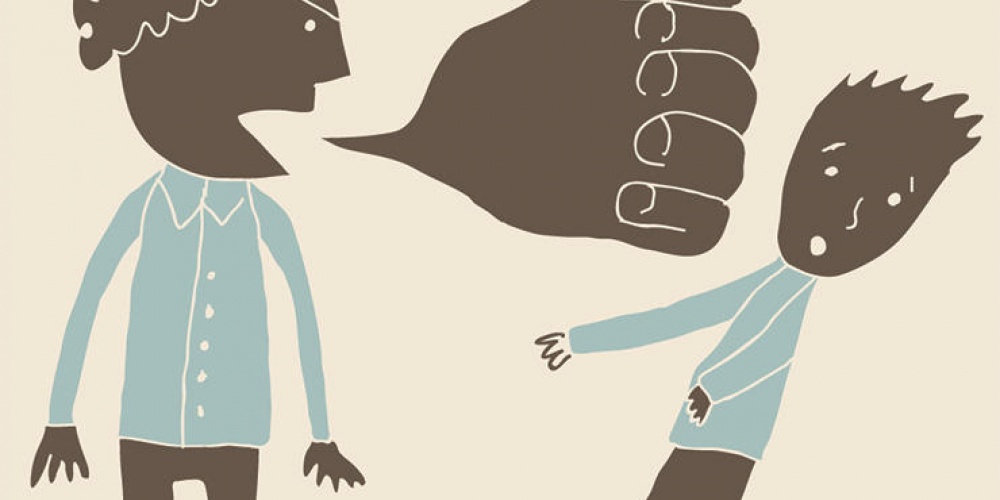 Few of us are unaware of how much emphasis Judaism places on proper speech. The Chafetz Chaim, the champion of ethical speech, enumerates 31 Biblical mitzvot that one can violate with negative speech. While money can (almost) always be returned, the impact of a verbal assault can last a lifetime.

“Rav Yochanan said in the name of Rav Shimon bar Yochai: Verbal wrong is more heinous than monetary wrong; because of the first it is written, 'and you shalt fear thy G-d,[1]' but not of the second. Rav Eleazar said: The one affects his [the victim's] person, the other [only] his money. Rav Shmuel bar Nachmani said: For the former restoration is possible, but not for the latter” (Bava Metzia 58b)

The Mishna lists three examples of ona’at devarim, oppression with words, or - as Rabbi Dr. Aaron Levine zt”l one of the founders of the field of modern Jewish business ethics (and a beloved teacher of mine) expressed it - needless mental anguish.

That people experience anguish in the business world is a given and unavoidable. Deals gone awry, increased competition, labour woes, government regulation, unexpected political events, natural disasters are just some of the factors that can upend the best laid out business plan. But that is the price for doing business. Such may be unfortunate but it is not needless. To cause anguish for no good reason is a sin no less than stealing money (in fact it may be considered stealing as well) or eating pork.

One is under no obligation to purchase every item one inquires about; but one may only inquire about an object if one is potentially interested in purchasing it. To do otherwise causes the salesperson to be needlessly disappointed, and is a huge waste of time - time that could have been spent helping a serious customer who, not getting the service he deserves, goes elsewhere. Such would cause one to violate both ona’at devarim and gezel, stealing.

In order to properly apply this (and many other) prohibitions, one must have an understanding of today’s marketplace. There is no prohibition to enter a store even if one has no intention of purchasing anything despite some slight disappointment the owner may feel. This is because storeowners like traffic in their stores; what are the chances that you will walk into an empty store[2]?  And many who walk into a store with no intention to buy change their minds once in the store. A more serious violation of ona’at devarim occurs when a competitor calls a store to gather information, which they then use to help divert business their way. Ironically the Internet allows one to gather much the same information without any ethical qualms. Anything one posts for the public may and can be used by others for their own purposes – which may be at great odds with the interests of the owner of the site.

As problematic as ona’ah is in a business setting, the Gemara is more focused on the non-business application of ona’at devarim.

Reminding converts or a ba’alei teshuva of their past, or that of their parents, is strictly prohibited. There is no obligation to love your parents, or any other specific group of people, with one exception: the obligation to love a ger, the stranger and the convert.  We who were gerim in Egypt and have suffered so much at the hands of others must be super-sensitive to the ger, and by extension all else.

This is perhaps the most important message of the Torah. “Rav Eliezer Hagadol[3], the Great, said: Why did the Torah warn against [the wronging of] a proselyte in thirty-six, or as others say, in forty-six, places?” (Bava Metzia 59b). The Torah does not mention something 36 or 46 times unless it is of utmost importance. And there is no other topic  mentioned as much[4]. This is not surprising. We who are created in the image of G-d are meant to imitate Him. And G-d loves the ger. “He does justice for the fatherless and widow, and loves the ger, stranger, giving him food and clothing” (Devarim 10:18). Should we do any less?

For much of our history the majority of Jews have assimilated leaving us at a fraction of the numbers we should be at, even taking into account our history of persecution. The number of “ba’alei teshuva” between, say, the year 70 and the year 1948 could literally be counted on one’s hands and toes – and likely with some limbs left over. Those who became non-observant generally stopped identifying with the Jewish people and the notion that one could grow up proudly Jewish but non-observant was unheard of.

The pain of the oppressed pierces the heavens. “All the gates [to heaven] are closed save for shaarei ona’ah, the gate of the oppressed” (Bava Metzia 59b). Let us do our best to ensure those gates need not be opened.

[1] This is a fascinating assertion. Our Sages explained that the phrase “you shall fear G-d” appears when the violation is one of intent and can easily be covered up. As G-d, and G-d alone, knows our intent the Torah exhorts us to fear Him and not violate the prohibition. Examples include the prohibition of giving inappropriate advice (“I thought it was good advice”), ignoring a lost object (“I did not see it"), or standing up in the presence of the elderly and wise (“I did not see him”). Rav Yochanan introduces a new angle; that the mere mention of fearing G-d in the context of a mitzva elevates its importance. Perhaps it is because these mitzvoth are so easy to ignore and hence, much violated makes them even more important.

[2] It would stand to reason that part of the success of Apple is the buzz of their stores. Packed with people, there is an excitement in the air that undoubtedly helps to fuel sales. (I have not been in an Apple store recently but based on their enormous sales, I imagine they are still packed to the rafters.)

[3] It is most interesting that the Talmud here refers to Rabbi Eliezer  with the adjective Hagadol, the great one. While that is how he is known in Jewish history he is almost never referred to as such in the Talmud. This is especially striking when one considers that this teaching of his follows on the heels of the most famous Talmudic passage involving Rabbi Eliezer that of the tanur shel achnai leading to his excommunication where he is Rabbi Eliezer. I have no other explanation save for the fact that this teaching emphasizing the primary importance of how we treat the ger is such a great teaching that the one who taught it is also great.

[4] To the best of my knowledge no list exists of these 36 or 46 references. Tosafot in trying to explain the increase to 46 says “some explain because we count ‘because you were strangers in the land of Egypt’ and similar to this” without explaining which similar phrases he is referring to. The ambiguity surrounding the exact count demonstrates how severely the rabbis viewed this concept. Any potential reference was used to bolster this teaching.

[5] I have never quite understood how it is permissible to refer to people as ba’alei teshuva or to say, "that is a ba’al teshuva yeshiva." What more need we do to remind them of their “former ways?” One might argue that the prohibition is violated only if the speech is meant as a putdown, but if done as a matter of praise – look at these wonderful ba’alei teshuva – it would be allowed. Perhaps, but I must say I am not convinced, nor is the reference to ba’alei teshuva always said with positive intentions.