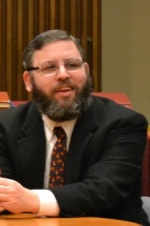 Rabbi Aryeh Klapper is Dean of the Center for Modern Torah Leadership and Rosh Beit Midrash of its Summer Beit Midrash Program, Instructor of Rabbinics and Medical Ethics at  Gann Academy, and a member of the Boston Beit Din.  He previously served as Orthodox Adviser and Associate Director for Education at Harvard Hillel and as Talmud Curriculum Chair at Maimonides High School. Rabbi Klapper has published in Tradition, Meorot, Dinei Yisrael, Beit Yitzchak and other journals and has presented at numerous academic and community conferences.  He is a popular lecturer who is consulted internationally on issues of Jewish law and whose work is cited regularly by both academic and traditional scholars.  In the words of Harvard Hillel Executive Director Dr. Bernard Steinberg, he is "provocative and evocative”.

In his decade of service at Harvard Hillel, Rabbi Klapper's innovative teaching and personal warmth attracted a broad range of students to his classes and home, and Harvard and MIT grads and undergrads are still frequent guests at Shabbat meals.   Rabbi Klapper's achievement in the area of Modern Orthodox leadership development is striking.  One of every eight male Orthodox students to come through Harvard during his tenure has gone on to study for the rabbinate, and many more of both genders have taken advanced degrees in Jewish studies and/or taught in day schools.  His SBM and Harvard alumni are already playing significanr leadership roles in the Jewish community as JLI Fellows, community rabbis, day school administrators and educators, academics, etc..

Rabbi Klapper's work at Harvard also had significant impact on developing non-Orthodox leaders.  Harvard graduates are the spearhead of the growing movement within Conservative Judaism for "halakhic egalitarianism", and have founded innovative communities in various East Coast cities.  Alumni attending JTS and RRC call him for advice and counsel, and gabbaim of the Student Conservative and Reform minyanim attended his classes and asked him for halakhic guidance and decisions.  He accomplished all this from an explicit and uncompromised Orthodox stance.

Rabbi Klapper also earned the respect of Harvard faculty.  His innovative PARTNERSHIPS educational programs involved parallel presentations with faculty in their area of expertise, and his Faculty Talmud class was started by request after several such programs.  His academic credentials within the Jewish Studies communities have been burnished by several well-received papers at the Association of Jewish Studies.