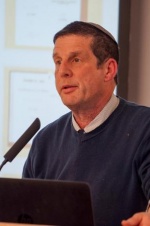 Daniel R. Schwartz, the Herbst Family Professor of Judaic Studies at the Hebrew University of Jerusalem, was born in Syracuse in 1952; after elementary studies there and secondary school in Silver Spring, Md., he moved to Israel in 1971, where he has been at HUJI's Dept. of Jewish History ever since. After completing his studies, culminating with a doctorate on ancient attitudes to the Temple cult, he was appointed to that department's academic staff; currently he is also the academic head of HUJI's Mandel School of Advanced Studies in the Humanities. His research focuses on the Second Temple (Greco-Roman) period of Jewish history, especially on its ancient and modern historiography. Among his books, are his commentaries on First and Second Maccabees and his Judeans and Jews: Four Faces of Dichotomy in Ancient Jewish History (2014), which presents the Shoshana Shier Lectures he delivered at the University of Toronto during his guest professorship in 2010.