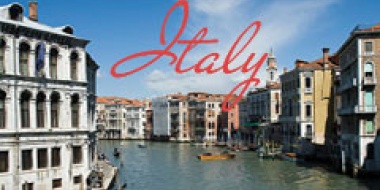 Join Torah in Motion for a unique and intellectually inspiring trip to Italy designed by Dr. Marc Shapiro.

We'll be visiting Rome, Tuscany, Pitigliano, Florence, Pisa, Ferrara, and Venice. This trip promises to be an unforgettable Italian experience, with a focus on places of Jewish interest. A central feature of the tour will be Dr. Shapiro's expert discussions of the many places we will visit, making the trip nothing less than a travelling classroom. In addition, we will be joined by expert local guides who will provide their own angle. Before departure, Dr. Shapiro will send participants an educational packet that will be used on the trip.

And of course, in addition to the special Torah in Motion educational and spiritual nourishment, the Journey Through Jewish History in Italy will feature:

Former ghetto area of Rome. Jewish Museum, the Great Synagogue, the Trastevere, and the Campo Di Fiori where, on Rosh Ha-Shanah 1553, the Talmud was burned.

Arch of Titus and its famous Menorah, the Colosseum, The ruins of the Roman Forum, an international center filled with great palaces and all the pomp that we connect with names like Caesar, Nero and Cicero. Spanish Steps and the glorious Trevi Fountain. Optional tour of the Vatican Museum.

Pitigliano, where Jews settled in the 16th century as anti-Jewish sentiment became stronger in the Papal States. Pitigliano became known as “Little Jerusalem” as the Jewish community grew increasingly prosperous throughout the following centuries. Visit the former ghetto, synagogue and Museum.

Florence, Piazza Michelangelo for an amazing panoramic view of the city below.

Friday, July 29: Florence
Visit to the Accademia where among other things we will see Michaelangelo's David; the Florence Synagogue; and the famous Uffizi Gallery.

Services at great Florence Synagogue, Walk to Piazza Delle Signoria and famous Duomo. Dr. Shapiro will also offer a class in the afternoon dealing with an Italian Torah theme.

Venice. Tour the Jewish Ghetto (Europe’s first official ghetto). The tour will include the various synagogues and the Jewish Museum.

Lido for an exclusive visit to the Jewish cemetery. Murano Island to see how they make the beautiful glass.  Piazza San Marco (which houses the Doge’s Palace), Rialto Bridge, which spans across the Grand Canal of Venice Island.

Transfer by boat to the airport for your flights back home.

"Thanks to Torah in Motion, we were able to view Italy from two perspectives. Marc taught us Jewish-Italian history, taking us to fascinating places few tourists get to see. Native Italian guides showed us the iconic sites of Rome, Florence and Venice. This made the tour a wonderful, educational experience."

"Magnificent sites and thorough explanations from our past heritage given by an excellent and knowledgeable Marc Shapiro."

"Kudos to Marc – he made the trip a truly memorable and enjoyable experience."

Dr. Marc Shapiro
Marc B. Shapiro holds the Weinberg Chair in Judaic Studies at the University of Scranton. A graduate of Brandeis and Harvard Universities, he is the author of numerous articles and reviews and...
Read Full Bio »