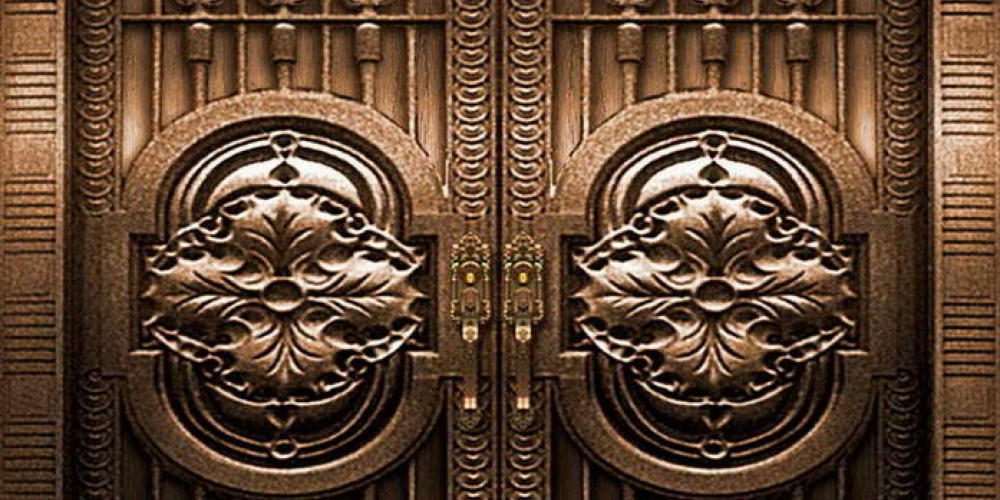 One of the central features of the Yom Kippur service was that involving the two goats: one offered as a sacrifice whose blood was sprinkled on the curtain of the Holy of Holies, and one on which the kohen gadol would offer confession for the sins of the Jewish people before it was led to the desert to be thrown off the mountain.

A lottery was held to determine which fate would await which goat. The Mishnah (Yoma 37a) describes how two pieces of boxwood, one saying "for the Name" and one  "for Azazel", were placed in a wooden box from which the kohen gadol would draw the lots. Wanting to beautify the Temple ornaments, "Ben Gamla made them of gold, and they would mention his name in praise". The Mishnah goes on to record other people who similarly enhanced the beauty of the Temple and are to be mentioned for praise.

Prior to performing any of the Temple services, one had to wash one's hands and feet. With many kohanim at work, the lineups could be long, as there were only two faucets in the Temple. Ben Katin increased that number to twelve, so that each of the kohanim involved in bringing the tamid shel shachar, the daily morning sacrifice, could wash at the same time[1]. "And he also made a machine for the laver, so that its water would not be invalidated overnight". All Temple vessels had to be emptied on a daily basis, ensuring that anything used in the Temple would be "fresh". Ben Katin hooked up the Temple water system to a well, rendering the water constantly fresh, so that the tedious job of emptying and refilling water would not have to be done daily[2].

"Munbaz made all the handles of the Yom Kippur vessels of gold; [Queen] Helena, his mother, made a gold candelabra that was placed at the entrance way to Temple courtyard." The Gemara (37b) explains that this enabled people to say the shema at the proper time. In an age before clocks, the rays of the rising sun would bounce off the golden plate, reflecting glints and signaling that the time for the recital of the shema had arrived.

The Mishnah concludes, "Nikanor; miracles happened to his doors, and they would mention him for praise". Nikanor travelled to Alexandria, Egypt, to obtain the best-of-the-best doors for use in the Temple. Unfortunately, a major storm struck as they travelled home by boat, and in a valiant attempt to ease travel, one of the doors was thrown overboard. When the captain instructed that the second door be thrown overboard, Nikanor said they should rather throw him off the boat.  Immediately, the storm ceased. Yet Nikanor was mitztaer, troubled, by the loss of the first door[3]. As the boat came to port in Akko, they noticed the door surfacing from under the boat. In commemoration of this "miracle"[4], Nikanor's gate was placed--at the main Temple entranceway, no less--in its original copper state. This is in contrast to all other gates of the Temple, which were made of gold.

The Talmud, in praising these people, invokes the verse zecher tzadik levracha (Mishlei 10:7), one we associate with the truly pious. The Talmudic definition of piety thus includes those who cut down on wait time, save us from extra work, beautify our utensils, or give us a mechanism to tell time. And acharon acharon chaviv, the pious have an almost irrational dedication to making mitzvoth beautiful. May we merit to be counted amongst the righteous.

[1] While in actual fact, thirteen people were involved in bringing the morning sacrifice, the actual slaughter of the animal could be performed by anyone, and no preparatory washing was required (Yoma 25b).

[2] This is somewhat akin to our mikvaot, which must use only rainwater. Yet in practice, fresh "tap water" is used, which is connected--neshikah, "kissing", is the halachic term used (most appropriate in the circumstances)--to the actual mikvah water, rendering all the water kosher for use in the mikvah.

[3] It is hard not to contrast this story to that of Yonah, who tried to run away from G-d and had to be thrown into the sea.

[4] I am not sure which is the greater "miracle"; that the doors made it to Jerusalem, or the extent of Nikanor's dedication. If the latter, then the word nissim should be understood in its original biblical meaning, as a sign (see, for example, Bamidbar 26:10)--in this case, a sign of great dedication.