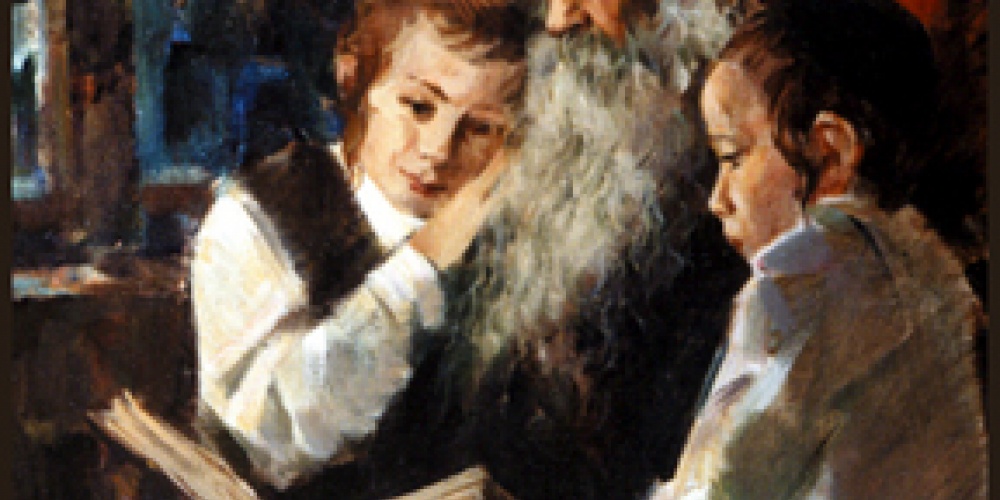 One of the famous concepts of Jewish law is the exemption of women from time-bound positive mitzvoth. The reason for such is specified neither in the Torah nor in rabbinic literature, leading medieval and modern commentaries to speculate as to the nature of this exemption--speculation made much more difficult by the fact that there are almost as many exceptions to this rule as cases governed by the rule itself.
Even more difficult to understand is the view of the Sages regarding the first mitzvah of the Torah. "The man is commanded regarding pru verevu, but not the woman. Rav Yochanan ben Bruka says regarding both of them it says 'and G-d blessed them and said to them, be fruitful and multiply'" (Breisheet 1:28, Yevamot 65b). The Gemara explains that the Sages and Rav Yochanan ben Bruka debate the meaning of the word v'chivshuha, "and you shall conquer it".

G-d gives man a three-part obligation: having children, filling the land, and conquering it. While one can have children and fill the earth with both males and females, conquering the world was--in the biblical worldview of the Sage--primarily the domain of men. They were the hunters, merchants, providers of food and shelter, the warriors and traders. They, and only they, conquered the earth.

Rav Yochanan ben Bruka, noting the use of the plural v'chivshuha, posits that the mitzvah applies equally to men and women. While women may have had a more domesticated role, that, too, is a form of conquering, albeit one given less fanfare.

Be that as it may, considering that a child has yet to be born without a mother[1], the exemption of women from this mitzvah is difficult to understand. In a beautiful piece, the Meshech Chochma (Breisheet 9:7), Rav Meir Simcha of Dvinsk (d. 1926), suggests that this exemption is an application of the Torah being a way of life whose "ways are the ways of pleasantness, and all her pathways are peace" (Mishlei 3:17). Having children is most painful and was, until quite recently, most dangerous. The Torah, the Sages argue--and Jewish law rules in accordance with the Sages--would not obligate a woman to put herself through the pain and danger of having children. If she wants to, that is wonderful and she is in fulfillment of the mitzvah[2], but to obligate her is something the Torah would not do.

What naturally follows from this is that the essence of pru verevu is distinct from the act of biologically having children. If it were not so, it would be illogical to exempt those who actually have children from this mitzvah. This idea finds its expression in numerous rabbinic sources.
Even the nomenclature our Sages give to this mitzvah bespeaks its deeper meaning. Asakta b'priah urevia, "Were you involved in being fruitful and multiplying?" is one of the questions G-d will ask us after our sojourn on earth, our Sages assert (Shabbat 31a). One who is osek, who puts in effort, is in fulfillment of this dictum, even if he does not actually have children. And it is not enough just to have children--one must be involved in raising them, in teaching and guiding them.

One can be 'involved' in this mitzvah even--perhaps especially--if one does not have biological children. The most obvious way to do so is through adoption, as it is those who raise children who are the "real" parents[3] (Sanhedrin 19b)."Whoever teaches his friend's son Torah, scriptures considers it as if he made him" (Sanhedrin 99b). "'And you shall teach your children'--these are your students" (Rashi, Devarim 6:7). One need not be a professional teacher to qualify as having students; even one who teaches but "one letter" is considered a teacher (Avot 6:3).

"For thus said the Lord concerning the eunuchs that keep My shabbats, and choose the things that please Me, and hold fast by My covenant: Even unto them will I give in My house and within My walls a monument and a memorial, Yad Vashem[4], better than sons and daughters; I will give them an everlasting memorial, that they shall not be cut off" (Yishayahu 56:4-5).

Having physical children is only one of the many ways that one can leave a legacy. As the prophet tells us, those not blessed with children can leave an even greater monument.

Oftentimes people live vicariously through their children, putting all their efforts towards them, even to the point of neglecting their own growth. While that, at times, may (or may not) be most commendable, it is no excuse to neglect our own spiritual growth. Sometimes it is those who do not have children who, free from the necessary "burden" of raising children, are able to reach great heights. I wonder if Nechama Leibowitz, the greatest teacher of Tanach of the 20th century, would have accomplished as much had she been raising children. Other 20th century towering figures who were not blessed with children include the Lubavitcher Rebbe, the Satmar Rebbe, and the Chazon Ish.

There are many ways of serving G-d and contributing to the welfare of man. Each of us must be osek, be involved in whatever our task may be, with the greatest of effort. No more, but no less, can be demanded of us.

[1] Modern technology may be able to split the genetic and gestational aspects of motherhood, but either way it has yet to be able to devise a way for a man to have a baby on his own.

[2] It is important to note that initially, the Gemara was of the view that one who volunteers for a mitzvah actually receives greater reward than one who does a mitzvah because they must (Kiddushin 31a). It is only because of our natural instinct to say no when we are told to do something that we consider one who is obligated in a mitzvah to deserve a greater reward.

[3] Interestingly, Jewish law has no requirement that one adopt children. If one cannot have children, one is exempt from the technical aspects of the mitzvah. One may or may not choose to adopt or to avail oneself of the many alternative reproductive technologies.

[4] It is based on this verse that Yad Vashem was given its name. While many killed in the Holocaust may have no biological heirs, they will never be cut off from the Jewish people.