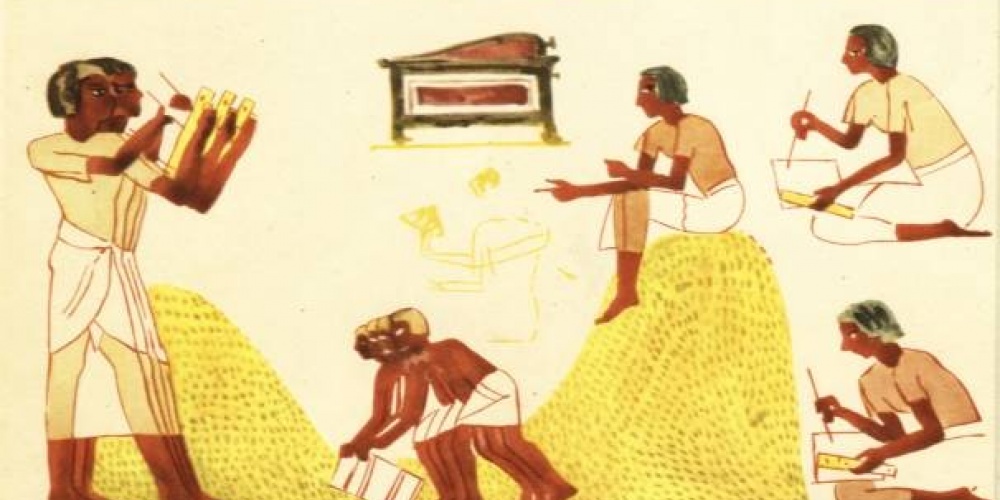 “And you shall surely know that your descendants will be strangers in a land that is not theirs for 400 years” (Breisheet 15:12). The Jewish people were destined to form their cultural identity in a foreign land. The Torah never specifically mentions that the foreign land would be Egypt.

Yet it is not by chance that the land of our formation would be Egypt. While the Torah warns us not to follow in the ways of the Egyptians (Vayikra 18:3), and there is a biblical prohibition against returning to the land of Egypt (Devarim 17:16), there was much to be gained by living in the most advanced country of the ancient world. From the biblical account alone we see technological achievement, political order, economic success, even military might. And as has been the case throughout history, our surroundings had a great influence upon us. Egypt was no exception. As is evidenced from the opening verses of sefer Shemot, the Jewish people achieved great success in the land of Egypt and, while greatly mistaken, we can understand Pharoah’s fear of the Jews.

While we think of the period of slavery as a terrible one for the Jewish people, the picture was much more nuanced. The Netziv, in his commentary on the Haggadah, notes that many Jews lived a life of luxury and riches even if there was a lack of certain freedoms. Being servant to the wealthy has its perks. Most—perhaps over 80%—of the Jews opted to stay behind rather than follow Moses into a barren desert. This rather idyllic picture of life in Egypt seems to be the simple meaning of the complaining of the Jews in the desert, who yearned to return to the land of Egypt as they “fondly remember the fish we ate for free, and the cucumbers, melons, leeks, onion and garlic” (Bamidbar 11:5). Even the bleakest period of baby killing was, as the Ramban notes (Shemot 1:10), very short-lived.

To become a great nation, the Jewish people had to be exposed to and learn from the great nations of history, notwithstanding the moral shortcomings of their societies. Yosef tried to protect the brothers from the moral dangers by settling them in their own enclave in the province of Goshen. Not surprisingly, the results were mixed at best, with the rabbis asserting that the Jewish people in Egypt eventually sunk to extreme lows. It is truly difficult to learn from only the positive aspects of a given society. It was time to move on to Sinai, taking the Divine law and the wisdom of the nations as we headed back to Canaan, now to be called the Land of Israel.

It was not only Egypt that posed a moral hazard to the Jewish people. The Torah was concerned lest we absorb the negative traits of the Canaanite nations. “You shall not copy the practices of the land of Egypt where you dwelt, or of the land of Canaan to which I am taking you; nor shall you follow their laws” (Vayikra 18:3). This fear of the moral decadence of the Canaanites dates back to the time of Avraham. Considering who Avraham’s mechutanim actually were, the fact that Avraham sent his servant hallway around the world to find a wife speaks volumes. Eisav’s marriage to Canaanite wives caused his parents great distress (Breisheet 26:34-35). Because of Eisav’s great respect for his father, he took an additional non-Canaanite wife (28:8). In listing the 70 family members who traveled to Egypt, the Torah singles out Shimon’s son Saul as the son of a Canaanite, implicitly criticizing him for marrying such a woman. The Hizkuni (46:10) claims that the death of Yehuda’s two sons, Er and Onan, was a punishment for his marriage to a Canaanite woman (38:2). It was not by chance the Egyptian people hated the nomadic ways of the shepherd, the primary occupation of the Canaanite people (46:34).

Changing entrenched cultural norms is a very difficult, if not impossible, challenge. Often one has to tear down what was, as trying to fix things from within just won’t work. Avraham left his home in order to set the stage for a great nation to inhabit the land of Canaan. Yet ironically, he and his descendants would have to leave that land and come back hundreds of years later reinvigorated and in a position to set up their own “culture”. Unfortunately, we did not fully succeed and twice we were forced from the land.

Our generation has been given the privilege to return to the Land. We will succeed if we are able to transcend our many cultural differences caused by thousands of years in so many diasporas, and establish a culture that focuses on moral excellence.