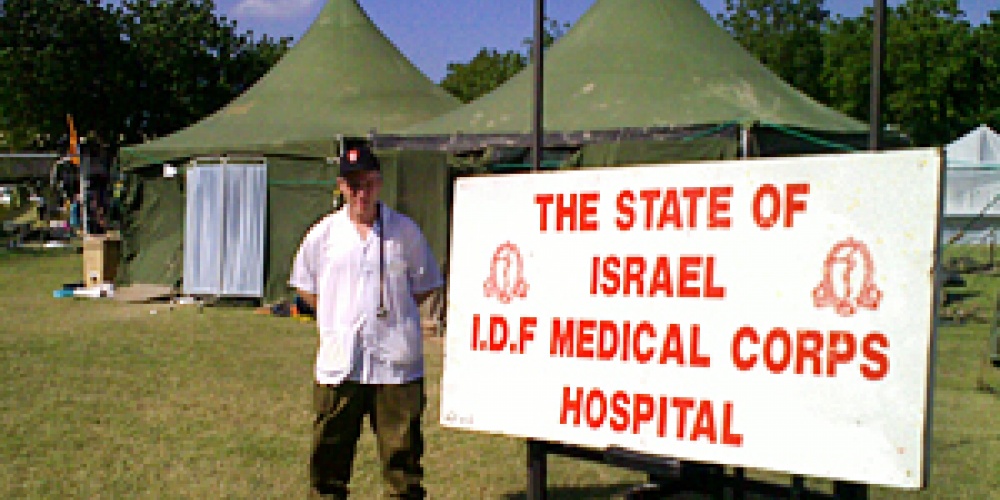 Immediately after the Divine revelation at Sinai, the Torah in Parshat Mishpatim presents a long list of mitzvoth, highlighting the link between Torah and mitzvoth. G-d's covenant with the Jewish people is based on commandments that we must fulfill.

Yet as is so typical of Jewish thought, one idea is followed by an opposing one. The centrality of obligation is immediately followed by one highlighting the great role of the volunteer. "Speak to the children of Israel and take for me a portion from everyone whose heart motivates him" (Shemot 25:2).

As the Ramban (Introduction to Shemot) explains, the Exodus from Egypt was a three-stepped process: physical redemption from slavery, receiving our Divine mission at Sinai, and building a Tabernacle to serve as a constant reminder of Sinai. The first two stages of redemption were primarily acts of G-d. The Jewish people were completely passive until the days before the Exodus, and their role at Sinai was none other than agreeing to accept an unknown Torah. According to the Talmud (Shabbat 88a), they had little choice in the matter as G-d held a mountain over their heads, threatening to drop it on them if they refused to do so[1]. Yet the third and final act of redemption was to be carried out by the Jewish people themselves--on a volunteer basis. One cannot be forced to worship G-d, nor can one make someone feel the presence of G-d. We must have a "motivated heart".

Most of us instinctively feel that one who volunteers demonstrates greater love and devotion to a cause than one who is obligated to perform the same task. After all, no one is forcing us to do so, and why else would we volunteer our precious time or money? The Talmud (Kiddushin 31a) tells us that Rav Yosef said he would make a party for the rabbis if halacha would follow the view of Rav Yehuda that a blind person is exempt from mitzvoth. Being blind himself and yet performing all the mitzvoth, he yearned to do them as a volunteer so that his reward could that much greater. But when he heard the teaching of Rabbi Chaninah that "gadol, greater is one who is commanded and does mitzvoth more than one who is not commanded[2] and performs them", he said he would make a party if told the law is not like Rav Yehuda.

While Rabbi Chaninah's view is the accepted one, being a volunteer often displays a greater commitment. However, lacking in obligation, one does not get nervous about missing a turn, and does not feel the burden of responsibility. There is, as Tosafot (s.v. gadol) explain, less pain; and with less pain comes less reward, in keeping with the rabbinic teaching "according to the pain is the reward".

Yet it could be that a volunteer--by taking his role very seriously--can rise above those "merely" commanded to do so. In explaining why one who forgets Ya'aleh vYavoh at ma'ariv is not obligated to repeat the Shemoneh Esrei, the Gemara explains "because the court does not sanctify the new moon at night" (Berachot 30b). In the days before a fixed calendar, the court could only declare a new moon in the day, retroactively turning the night before into Rosh Chodesh. As one who davened ma'ariv did not know whether that day would be the start of a new month until the morrow, Ya'aleh vYavoh never formed part of the davening[3].

Tosafot (Berachot 26a s.v. veta'ah) wonders, why not give a simpler explanation--that the davening of ma'ariv is actually optional, and we do so as volunteers--and hence, there is no need to repeat the Shemoneh Esrei. While maarive may be optional this is irrelevant. One need not volunteer[4], but if one does volunteer, one must do so properly and take it as seriously as if you are obligated.

[1] The relationship between this concept of Na'ase V'nishma we will leave for another time. Suffice it to say that many commentaries explain that such was said only after Sinai, paralleling its appearance in the Torah in Parshat Mishpatim.

[2] Tosafot, s.v. delo, derives from here the principle that a woman may make a bracha, blessing G-d for commanding us in mitzvoth, even on those mitzvoth for which she volunteers. Tosafot reasons that if a volunteer would be deprived of the right to make a bracha, Rav Yosef would not have rejoiced, as he would thereby lose the opportunity to make a bracha.

[3] It is amazing how this law has such a psychological impact--at least on myself. While I almost never (maybe it is never) forget Ya'aleh vYavoh at Shacharit--where repetition of theShemoneh Esrei is called for--if I could produce a batting average corresponding to the percentage of times I forget Ya'aleh vYavoh at ma'ariv (though not last night) I would be a very rich man.

[4] Today, we treat ma'ariv as a full fledged obligation--almost. Its volunteer status is why there is no communal repetition (chazarat HaShatz) and explains why women, who are obligated as men in prayer, are exempt from davening ma'ariv.