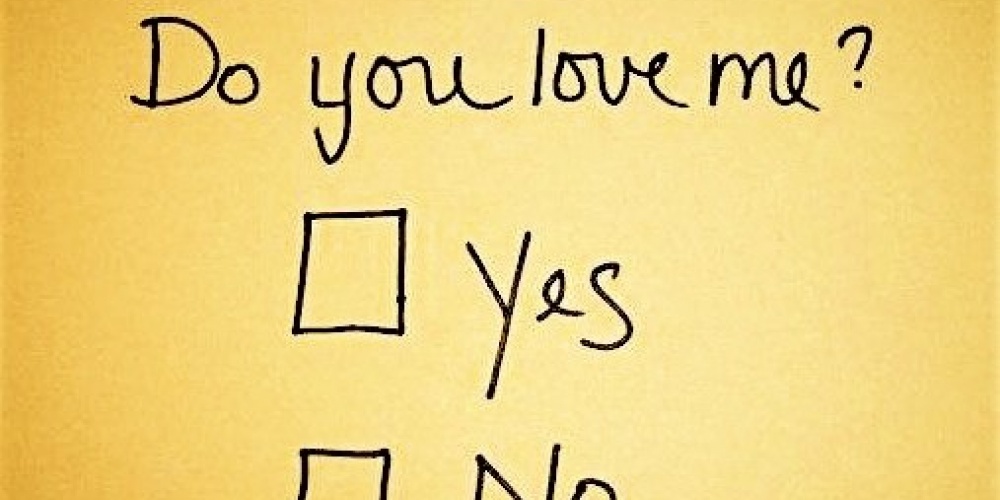 How can you tell if somebody loves you? We all understand that words alone are hollow, and that it is actions that count. Even so, it is not always easy to understand the actions of others. Misreading one's intentions in this sensitive area can have disastrous consequences. Imputing noble motives where none exist is no less dangerous than falsely accusing someone of nefarious intentions. While the latter is liable to lead to tensions, the former can lead to death. Testing someone's love trying to snare someone seems a little immature and can be dangerous. What if your beloved fails the test? Yet it appears that this is what the Torah tells us that G-d may do to the Jewish people.
“When a prophet or a person who has visions in a dream arises among you, He may present you with a sign or a miracle. Do not listen to the words of that prophet or dreamer. G-d, your Lord, is testing you to see if you truly love your Lord” (Devarim 13:2-4). Apparently, G-d is going to allow a prophet to correctly perform wonders to see whether or not you will then listen as he tries to lead you astray. Will you be wowed by his truly amazing feats or will you have the strength to look deeper into his true character? Why is G-d putting you in such a situation? What kind of love is this?
A test of G-d is like no other. It is not meant to determine if we will pass or fail; G-d needs no test for that. Rather, a test is to challenge us, to enable us to use resources we were not sure that we had. G-d did not test Abraham to see whether he was willing to sacrifice his son; rather, G-d enabled Abraham to reach the level of love for G-d that made him willing--not yet understanding that this is in reality abhorrent to G-d--to sacrifice everything for the love of Him. It is no coincidence that it is Abraham who is called 'My beloved'. The first aspect of love is challenging us, giving us opportunities to fall so that we can rise that much higher.
In truth, while we cannot fathom the ways of G-d, the many tests that we all face--some tragically involving great pain and suffering--can and must serve to strengthen us. We are bidden to ask not lamah, why, but lemah, to what purpose? Strange as it may seem to modern man, who equates love with pleasure, Judaism sees no contradiction between pain and love (just ask a mother in labor). Thus, Judaism has taught the complex concept of Yishurin shel ahava, afflictions sent to man that actually express His love towards us.
There is, to my mind, an even more fundamental lesson here. G-d does not want us to observe the mitzvoth because they are in vogue or we are amazed by some miracle. Miracles can never have a long-term effect on people's behaviour; their impact wears off after a few short days. We need look no further than the generation of the desert who, despite witnessing the greatest miracles of all time, were a stiff-necked complaining lot. We observe mitzvoth because they are G-d's command, not because we are influenced by some charismatic leader.

The one trait that Moshe Rabbeinu surely lacked was charisma. His total lack of oratorical skills would, in modern times, have doomed him to political oblivion. Moshe was the greatest of prophets, as the role of a prophet is not to be a great speaker but rather a great spokesperson, relaying G-d's message to His people and beyond.
With the destruction of the first Temple, the period of prophecy came to an end. While on the surface, this is a much lamented development, it can be viewed much more positively. During our early years we needed G-d's constant guidance expressed through miraculous events and righteous prophets. Without these constant reminders of the Divine presence, the nascent nation born from slavery would have been stillborn. However, as we developed and matured as a people, especially with the development of the Oral Law, the centre of authority shifted to our rabbinic leaders.

Torah is not to be found in heaven; it is we humans who must interpret the Divine will. While there is greater uncertainty, there is also greater struggle and greater involvement with Torah. Just as a parent must wean a child from total dependency, so, too, our Father wants us to take responsibility for the development and implementation of Torah. We must see the Divine manifestation in history even, especially, when it is not obvious. G-d truly loves us and thus, insists that we not be swayed by charismatic false prophets, but rather, by the serious words of Torah.
Parsha Thoughts: Rabbi Jay Kelman
Re'eh
D'var Torah
thought for the week
parshat hashavua
Re'eh
nature of prophecy
good politician
moshe rabbeinu
why keep mitzvot