Pesachim 49a: A Pesach Wedding 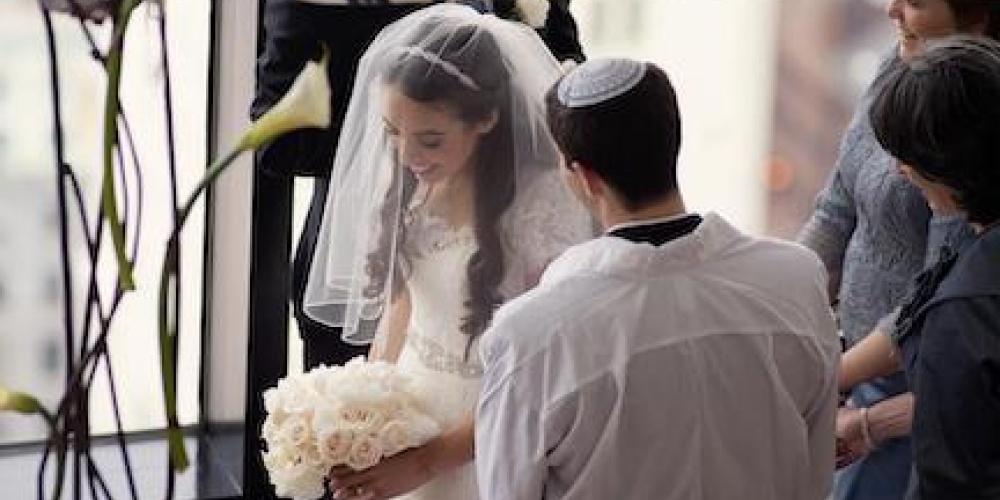 Getting married is a very big deal, and a mitzvah that supersedes almost all else. And like all mitzvoth, this is something we should do at the earliest possible opportunity. Our Sages recognized that, unlike other mitzvoth, twelve or thirteen would be too young for this mitzvah and recommended an age of eighteen. While that made sense in an era when most were working by their bar mitzvahs and life spans were much shorter, for most today, eighteen is just too young. But when one is ready, one can and should get married at the earliest opportunity. Even in the middle of kinnot on Tisha b'Av, Jewish law allows (encourages) one to get engaged (the wedding will have to wait at least a day), "lest someone else does so first".
Rav David Tzvi Hoffman[1] was asked if one may marry during the Aseret Y'mei Teshuva. While it is almost inconceivable that one would do so today (though I did have a friend who married the day after Yom Kippur; not surprisingly, the wedding was in Israel), R. Hoffman writes that it is permitted--and in fact he, personally, got married then. There is no better act of teshuva heading into Yom Kippur than fulfilling G-d's dictate that "it is not good for man to be alone". It's as if the days before Yom Kippur are the ideal wedding time.

Not surprisingly, Jewish law allows one to marry when mourning for a parent; starting the next generation is the greatest act we can do to perpetuate the memory of our parents.

A Jewish wedding is comprised of two parts, eirusin andnissuin. The first consists of placing a ring on the bride's finger; it is at that point that the couple is legally married, and would need, G-d forbid, a get, to break the union. However, they were not allowed to live together until after the nissuin, accomplished with the recital of the sheva brachot under the chupah followed by yichud. While in Talmudic times, there was often a gap of up to year between these two parts (leading to the notion that a couple can be married, but forbidden to live together-very different from today's moral climate!), today they are done in immediate succession.

With this background, we can appreciate the ruling of the Mishnah (Pesachim 49a) regarding one who is going to a celebration, "a festive meal, a seudat eirusin, in the home of his father-in-law", on erev pesach and remembers that he has chametz in his home (apparently, bedikat chametzwas not exactly on his mind). The Mishnah teaches that if there is not enough time to go and rid his home ofchametz, he should nullify it in his heart and enjoy the festive meal--the first of two he will have that day.

The Gemara initially explains that such a ruling follows the views of Rav Yossi, who claims that even a seduat eirusin--on erev Pesach, no less--fulfills a religious obligation and hence, that mitzvah should not be interrupted to go home and search for chametz. One may rely on nullification of chametz instead. The Gemara then clarifies such, and asserts that all agree that at least the first meal celebrating eirusin is indeed a mitzvah--the only argument being whether subsequent meals celebrating such are also deemed a mitzvah that would allow for leniency in ridding our home of chametz.

Relying on "nullification of the heart" is a rule that applies to all mitzvoth--and the Mishnah, in fact, lists as other examples one who is going to slaughter his paschal lamb (very understandable on erev Pesach) and one who is going to the brit of his son (the timing of which is not in his control). Adding this third case of marriage is both unnecessary and deliberate. Pesach is the holiday of Jewish nationhood yet, strikingly, is celebrated in the home. When a couple marries and sets up a Jewish home, they are cementing the blocks of our nation, linking themselves in the chain dating back to Abraham and forward to the Messianic Era. Mazal Tov!

[1] While relatively unknown today, he was considered the preeminent authority in Jewish law in late 19th  and early 20th century Germany. His 3-volume collection of response, Melamed Lehoeil, is a fascinating collection of great halachic erudition, and sheds much light on the nature of German Orthodoxy. He taught in Rav Shimshon Raphael Hirsch's school before becoming the Rector of the Hildesheimer Seminary in 1899, following the death of its founder, Rav Azriel Hildesheimer. Like almost all German rabbinic figures, he received a doctorate, writing his dissertation on A Biography of Mar Shmuel. In academic circles, he is best known for his defense (written in German) of the Divinity of the Biblical text and his critique of the Documentary Hypothesis developed by Wellhausen. Demonstrating how much Orthodoxy has changed, this champion of Wissenschaft Des Judentums,the academic study of religious Jewish texts, was also a member of the Moezet Gedolei HaTorah of Agudat Yisroel.