Parshat Vayetze: Listen to Your Mother 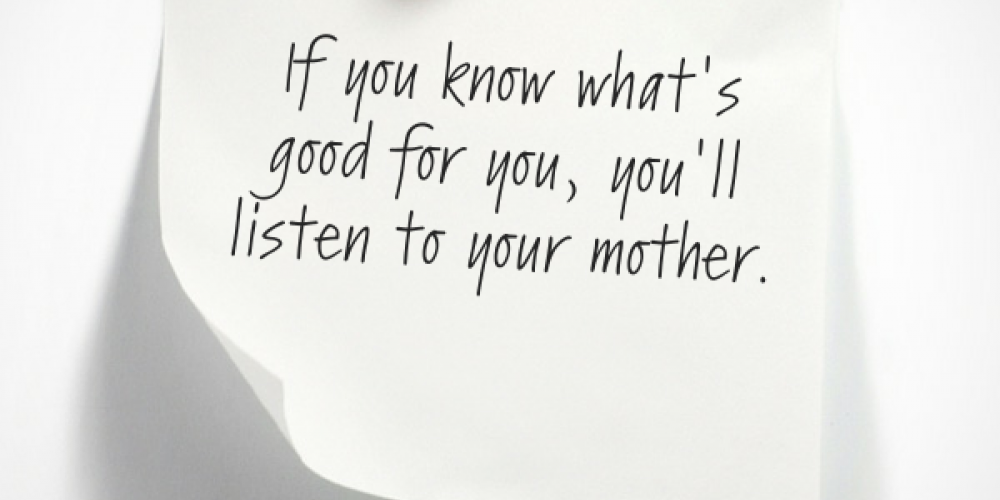 The Torah tells us nothing about the upbringing of Abraham; we do not even know the name of his mother. All we know about him is that he was the oldest of Terach’s three children, married to Sarai who was barren, and his father--absent a command from G-d--started on a journey to the land of Canaan.

We know precious little about Yitzchak’s upbringing, save for the fact that his mother was fearful of the influence of Yishamel upon him and that he willingly accompanied his father to the Akeidah.

Whatever it was that motivated Abraham to seek and discover G-d, or Yitzchak to follow in his path, the Torah is silent about it. Presumably, the Torah felt the motivations were, in the scheme of things, not important. How one discovers G-d, and why one chooses a path of “righteousness and justice” (see Breisheet 18:19), is of minor importance. It is the fact that one chooses such that matters. There is, in fact, a great risk in telling us too much information about their formative years; people might mistakenly want to copy, exactly, the paths of our forefathers, not realizing there are many paths to G-d, and often we must choose a different road to get to the same destination. The same path may be disastrous. When Yitzchak tried, as his father did before him, to go to the land of Egypt to escape famine in the land of Israel, G-d commanded him not to do so. It is not always easy to know when we are to follow the path of those before us and when changing circumstances demand changing responses.

As we move to Yaakov and Eisav, the Torah tells us a little more. The Torah describes their natural inclinations and the interaction between the two of them, but little else. Yaakov bought the birthright from Eisav at a young age (15, according to the Midrash) but did not actually “claim” it until many years later (63 according to the Midrash). What happened in between is anyone’s guess.

It is when we get to the children of Yaakov that the Torah elaborates with a more detailed description of their lives. Perhaps because only with Yaakov do all his children remain in the Jewish fold; but more likely, because their adventures have so much to teach us. Clearly, the Torah felt that many events in the lives of Abraham, Yitzchak, Yaakov, and even others of the children of Jacob were not of eternal significance.

One point that I find quite striking is the changing role of the mother. It is clear that it is Sarah and Rivka who are the heads of their homes and the molders of their children. The debate between Abraham and Sarah regarding their children must have been quite intense, as it took intervention from G-d to resolve. G-d Himself instructed Abraham to listen to his wife: “All that Sarah says to you, heed her voice” (Breisheet 21:12). One can only guess at the impact on Jewish history had Rivka not “encouraged” Yaakov to “trick” Yitzchak.

Yet we see no relationship between Leah and Rachel and their children. Rachel dies in childbirth, leaving behind a newborn and a young child; but even with Leah, we see no relationship with her children. We do not even know if she is alive when Yosef is sold, nor does it (the Torah seems to say) really matter. Clearly, it is Yaakov who is the dominant force in the life of the children. And perhaps that lack of maternal influence allowed the “hatred” of the brothers towards Yosef to fester and tragically play out. Sarah ensured that Yitzchak and Yishmael would be separated, and Rivka sent Yaakov away[1], allowing time to heal the tension between Eisav and Yaakov. But Yaakov, unlike his mother and grandmother, did not grasp the danger Yosef was in, even sending him alone to go to his brothers in Shechem (Breisheet 37:13).

If I may, I would like to suggest that Leah and Rachel had little influence on their children because their focus was elsewhere. Having children became the “battleground” for Yaakov’s love, and “points” in the deteriorating relationship between Rachel and Leah. “Because G-d has seen my affliction (Reuven), because G-d has heard that I am hated” (Shimon), “this time my husband will become attached to me” (Levi); and on and on it goes. The Torah seems to highlight this with the birth of Rachel’s eldest. While Rachel calls him Yosef because “G-d has assaf, gathered away my disgrace”, Yaakov so named him, “may G-d, yoseef, add for me another child”.

While Sarah and Rivka are buried with their children, neither Leah or Rachel are buried with any of theirs. It was they who were the founding mothers of the Jewish nation, and only they who had all their children remain in the fold. And we have discussed their greatness on other occasions. Yet the fighting--even if not quite in the open--between them helped set the foundation for the fighting of their children. We await the day when the “tree of Yehuda” and the “for Joseph, the tree of Ephraim will become one in your hand” (Yechezkel 37:16).

[1] Highlighting this is the Torah’s description of Yitzchak ordering Yaakov to go to Lavan. It follows after Rivka's directions to do the same, and occurs only after Rivka tells Yitzchak to do the same. Yet Yitzchak, seemingly oblivious to the dangers of the brothers staying home, tells Yaakov (on the instructions of Rivka) to go to Lavan’s home to find a wife.