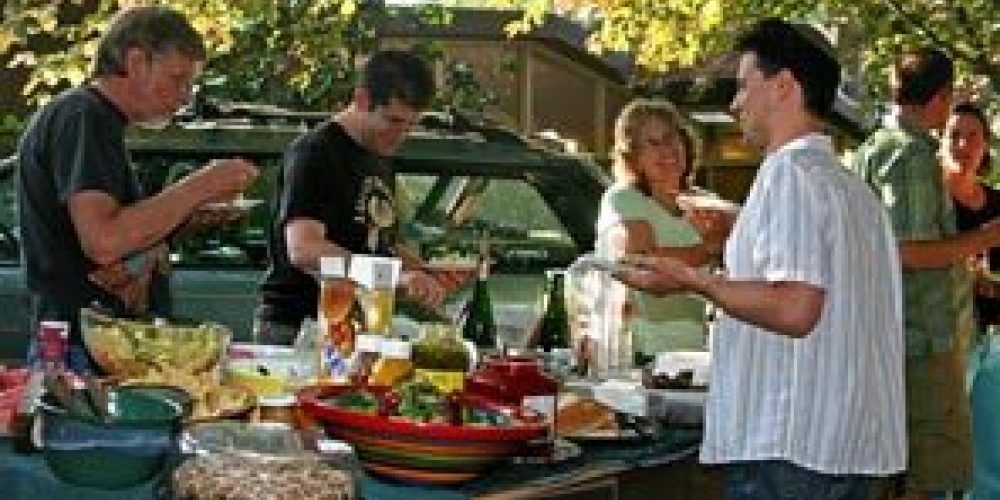 The concept behind an eiruv is that the people making it join together as one large household. Each household contributes some food, which is put in a common area, and all are welcome to come and eat. The area within the eiruv must be enclosed, and there is much Talmudic discussion on what exactly constitutes an enclosure.

The typical Talmud eiruv was made in a courtyard of no more than a few homes; occasionally, a number of courtyards would make a joint eiruv known as a shitufei mavuot, a mavoi being a common area for a number of adjoining courtyards. If even one person in the courtyard chooses not to participate and fails to donate some food, all in the courtyard may not carry on that Shabbat. That is, unless that person is mevatel reshut, nullifies his or her rights to the courtyard, so that the others are allowed to carry there while he himself cannot.

However, such nullification only works amongst Jews; “one who lives with a worshipper of the stars or with one who does not accept the laws regarding an eiruv prohibits [those in the courtyard from carrying]” (Eiruvin 61b). When a non-Jew—for whom there is no such concept as an eiruv—lives in the courtyard, one must actually rent this non-Jew’s property, regardless of whether he wants to contribute his share of the food.

It was the second aspect of the Mishnah, regarding a Jew who denies the concept of an eiruv, that was the source of debate both in the Mishnah itself, and subsequently in the Gemara. Can people who don’t see the point of an eiruv be included in one? Rabban Gamliel answered in the affirmative, saying that even a tzedui (one who denies the entire concept of an Oral Torah) is to be treated no differently than other Jews. He could nullify his property to the others in the courtyard, allowing them to carry there[1].

In the course of the Talmudic discussion (ibid 69a), a distinction is made between a “run of the mill” sinner and one who publicly violates Shabbat. As Shabbat is our testimony to our belief that G-d created the world, one who violated Shabbat was viewed—correctly, at that time—as one who denied the existence of G-d. Hence, the extremely harsh Talmudic view towards the public Shabbat violator who was, for the purposes of much of Jewish law, considered as a non-Jew. (While the private Shabbat violator also presumably denies G-d as the Creator, by not flaunting his heresy, he is spared such condemnation.)

This harsh view began to change when Rav Yakov Ettlinger, Chief Rabbi of the joint communities of Altona, Hamburg and Wandsbeck, penned a responsa in 1850 regarding the many who—while technical violators of Shabbat—could in no way be classified as atheists. Similar to most of affiliated world Jewry today, the majority of Jews in his time viewed “violating Shabbat as something that is allowed….and amongst them are those who daven on Shabbat and make Kiddush, and afterwards violate Shabbat with activities forbidden by the Torah and rabbinic law”.  His response—which in its time was so radical that he prefaced it with a comment that it is “not lehalacha lema’ase”, that it is theoretical and not meant for practical application—paved the way for many others who gave a series of justifications for allowing, and even welcoming warmly, the Shabbat violator into our religious midst.

This lenient attitude has echoes in the Talmud, where the Gemara (ibid) records that there was one (his name is intentionally left out) who was carrying on Shabbat; but when he saw Rav Yehuda Neshiah in the distance, he quickly covered the object he was carrying. Rav Yehuda declared that such a person may nullify his property, i.e., he is not to be considered a non-Jew. Rashi explains that by hiding his sin, he is “only” a private Shabbat desecrator. Rav Soleveitchik went one step further and ruled that one who hides his Shabbat desecration from the rabbi cannot be deemed a public violator of Shabbat, even if he is happy to violate Shabbat in the presence of many laymen.  Parking one’s car around the corner from shul is religiously significant, displaying a sensitivity towards observance.

Interacting with non-religious Jews and with non-believers is not a new phenomenon. While the Talmud discusses the ramifications of a Jew and a non-Jew living in the same courtyard, no such discussion takes place regarding two Jews, regardless of their religious practice. We must learn to live with each other; even finding ways to join together in making an eiruv, demonstrating the unity of the Jewish people.